Ecler was established in 1965 in Barcelona. Originally Ecler designed and produced HI-FI audio equipment, till they decided to enter the professional audio industry in the 1970s. The main reason for this was the growing demand for audio technologies in the Spanish tourism industry, which was rapidly expanding at the time. Hotels, bars, restaurants, and clubs were opening along the whole coastline of Spain and it provided good growth opportunities for Ecler.

The tourism industry requires audio products, mostly amplifiers, which are capable of working safely and without interruptions under the roughest of circumstances – operating at maximum capacity for many hours and maintaining a constant level of output power. An aim to create reliable premium-class amplifiers, which would meet the needs of the industry, forced the company to develop and patent the new SPM (Switching Power MOSFET) technology.

The project was started at the end of the 1980s in cooperation with Motorola and the first products PAM 500 and PAM 800 were introduced to the market in 1988. Previously this technology (SPM) was used only in the robotics industry and Ecler was the first to apply it in the design of professional amplifiers.

In 1997, Ecler received an award from the Generalitat de Catalunya (Catalan autonomous government) for the implementation of technological innovations (SPM Technology).

During this time Ecler was also recognised as one of the best DJ mixer producers in the world. The goal of Ecler has never been the plain production and sale of audio equipment, but also constant development in terms of technology and design. Ecler was the first professional audio company to engage in business with the world famous Italian industrial designer Giugiaro, who has since created the design for a number of product lines.

During the past years, Ecler has conquered a steady position in the market of professional audio-visual services by successfully operating in six market segments: education, the corporate market, trade, hospitality, sports, and recreation.

Today the company has a wide global network which includes more than 50 countries. 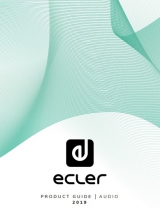 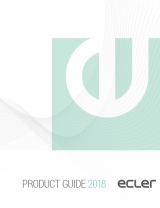