The history of the Latvian National Opera and Ballet (LNOB) building started in 1856, when the architects Otto Dietze and Johann Daniel Felsko designed a plan for the reconstruction of the city centre, which included a city theatre on the side of the Riga canal.

The building of the theatre began in the place of the former Pancake bastion in 1860. It was finished in three years; the theatre had seats for almost 2,000 spectators. In 1863, the new building was opened with a staging of Friedrich Schiller’s Wallenstein’s Camp and Ludwig van Beethoven’s Fidelio.

In 1919, the building of the Riga City Theatre was transferred to the Latvian Opera Company, and at the end of 1919 the theatre was renamed – the Latvian National Opera; its first production was Richard Wagner’s opera The Flying Dutchman.

In 1944, along with the Soviet occupation, the Latvian National Opera became the Latvian SSR State Opera and Ballet.

In 1990, the theatre again acquired the name the Latvian National Opera, and it was closed for the reconstruction of the building and the restoration of the interior, strictly following the historic interior designed by Schmeling and stylistically matching the new halls.

In 1995, the reconstruction of the old building was finished, and was opened by the Opera Company with a brilliant symphonic music concert series and the staging of Janis Medins’s opera Fire and Night.

In 2001, a modern outbuilding complex was finished, providing a new space for the technical and creative staff, and a New Hall with seats for 300 spectators to implement varied art projects.

At the moment, the LNOB building serves as the face of Riga, proving the significance of good architecture and high culture in the city.

SGS Sistēmas have been cooperating with the LNOB for many years. We have supplied various audio and stage lighting equipment to the theatre, and ensured maintenance of the equipment supplied.

The repertoire of the LNOB includes diverse shows and events – classical, beautiful opera and ballet productions, as well as modern experiments and technically complex creations. The specifics of the opera and ballet productions with often impressive, large and mobile decorations, spectacular costumes and complicated stage arrangement are a challenge both for the artists and the technical team, because each production needs an individual solution to fully emphasise and implement the creative idea of the director, stenographer, choreographer and costume designer. Therefore, the technical staff of the theatre needs to be particularly aware about the technological development and technical parameters of the equipment, etc.

To add to the lighting equipment of the opera the necessary profile moving beam lights, the technicians researched various lights offered by manufacturers, and the final choice was Clay Paky’s latest addition Scenius Profile, which has several important features fitting a theatre’s (opera) needs:

Moreover, the technical staff of the theatre (opera) has previously worked with Clay Paky products, and have highly estimated their quality and reliability. The theatre lighting equipment already includes 8 Clay Paky Alpha Spot 700 and 4 Clay Paky Alpha Wash 1500. Now, 5 Clay Paky Scenius Profile have been added to their set. 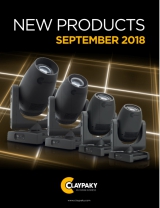 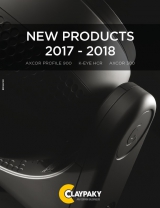