In 1999, John Skjelstad became involved in a unique project – to create a system that would track the movements of people, which had previously been developed only to keep track of transport and goods logistics. Based on this experience he founded TTA (Total Theatre Audio) in 2004 with the main focus on the application of this technology in the entertainment industry. The new system is based on radio technologies as well as the newest findings in the field of acoustics and sound localisation.

Stagetracker FX is an innovative and award-wining stage movement tracking and sound localisation system which is used in both theatres and other live-sound stage projects. It solves the problem related to accurate localisation of the sound source on stage in the case of an electronic audio supply, allowing tracking of the performer and the movements of his/her microphone. Besides, the system is designed in a way that it may be easily and effectively controlled by any technician, not only by the sound director. 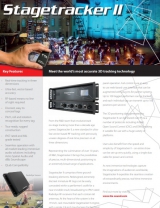