This is what Clair Brothers, the legends of the audio industry, have to say about their work, “We not only create iconic speakers! We construct the sound!”

Clair Brothers is a company which set a goal to craft the world's highest quality audio products. The company boasts focusing an impeccable attention to the detail and nuances, thus getting tremendous sound quality, which is self-evident for Claire Brothers and relatable to each of their products without exceptions.

Clair Brothers designed the first stage monitors and the first hanging sound system for indoors – a solution which has now become a standard part of their industry.

The story of Clair Brothers began in 1954, when a grocer decided to give a sound system as a Christmas gift for his two sons, Gene and Roy.

Both brothers did not have to wait long to use the new “toy” – they used it to organise local dances, Easter egg hunts and other events important for the local youth. That was the beginning which turned into an industry legend.

In 1963, Gene and Roy purchased a loudspeaker re-coning business from a local music shop, thus letting them buy loudspeakers for dealer prices and build acoustic systems for a Lancaster music shop.

By selling their acoustics to musicians, the brothers were frequent guests at nightclubs, in a mission to see their products live in concerts. That was where the brothers understood that they were interested only in direct jobs with the musicians, without intermediaries. That is how they could enjoy their work and earn money at the same time.

Not long afterwards, they had an opportunity to work with Frankie Valli and the Four Seasons, performing at the same hall. At that time, Valli had already grasped the major link between quality equipment and the sound quality of a concert, and he had decided to use his own sound equipment instead of relying on the equipment provided by each location. The meeting with the brothers was like winning a lottery – the boys were sound enthusiasts, they were available at that moment and ready to work cheap. They asked 100 dollars for each concert, including transportation and expenses. It was clear that the brothers were not very keen on money. Gene tells that their first tour in Ohio ended with approximately 40 dollars profit. It was not a very profitable deal even in 1966, however it spoke volumes about the company’s principles – sound was the most important!

The brothers are considered the first sound engineers touring with musicians’ bands. Providing of sound services to concert shows was their first goldmine and has always been a major part of the company’s operations, as well as the brothers’ passion.

Along with servicing tours and the F&M college came a need for a second sound system. By borrowing and saving every penny, the brothers were able to gather enough to buy additional equipment.

However, soon they understood that their equipment could not handle the task, because the concerts became louder.

The necessity created an innovation – the brothers began combining loudspeaker details and boosting their capacity, thus making their equipment one-of-a-kind in the market.

In 1968, the Cream concert for 18,000 people became the first big concert for Clair Brothers. The order was one of the links in their future success – Bob Kirnan, a sound and lighting engineer from New York, was contracted for servicing a concert. Due to his loaded schedule, he recommended the brothers whom he had met during the Four Seasons tour. The show in Philadelphia was a game changer for Clair Brothers, once a small, even insignificant sound company. Electric Factory, the organiser of the Philly concert, started to hire the brothers for their shows and promoted their services to the most popular bands in San Francisco at the time.

Along with their business development, the brothers quit their day jobs to fully focus on developing Clair Brothers. They could even afford hiring their own staff.

The next four years, from 1968 till 1972, were dedicated to large-scale development of products and their range. During this time the company introduced many novelties and innovations, including slant monitors, four-way sound systems, electronic crossovers and aluminium hanging systems.

1974 was a breakthrough year for the company with the creation of the famous S4 single box four-way line loudspeaker system, an all-in one four-way box with a hanging grid system. The system was used on Rod Stewart’s tour, and it created such an industry buzz that Clair Brothers was hired for the Rolling Stones 1975 tour.

The S4 with its occasional updates was unparalleled for 36 years. Its loudspeakers were even used in 2008 for the closing of the NY Mets stadium in New York City.

The work commenced by Gene and Roy is being continued by the next generation – the tours are handled by Troy Clair, while Barry Clair runs the systems installation department. Clair Brothers is proud of its rich history and development – from its modest beginnings with supporting just one show per night to high quality sound systems brought to a multitude of world-class acts, all over the world!

Now, Clair Brothers not only technically supports world-class shows, but has also created a wide range of products available to everyone who wants to make their event memorable with a high-class audio system. 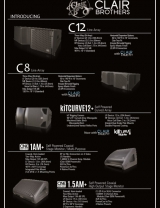 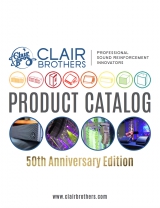